BARIN, the industry association for airlines undertaking business in The Netherlands, supports sustainability, but opposes a Dutch aviation tax to fund the national general budget (“schatkist”). Studies in the Netherlands, e.g. by CE Delft 2018, and others have concluded that national aviation taxes do not benefit the environment. As a result of capacity crunches and demand, national taxes do not lead to less flights but to merely moving flights and demand across borders. The result is that the net effect on CO2 emissions from aviation, noise and fine particles is marginal.

The Dutch Bureau for Economic Policy Analysis (CPB) and the Netherlands Environmental Assessment Agency (PBL) concluded in 2016 that “such a levy will not lead to less CO2 emissions. The levy would collect around 0.3 to 0.5 billion euro, depending on the execution. The number of passengers from Schiphol will decrease by 10 to 20 per cent. Previous experiences (www.ikverticket.nl) show that most travellers will not fly from Dutch airports, but will evade to foreign airports. The prosperity-effect is probably negative.”

A report by SEO from 2012 shows that the introduction of an aviation tax could lead to a decrease of 37,500 jobs.

BARIN believes the best way to reduce CO2 emissions is through the ICAO-United Nations agreement called CORSIA. Aviation is a global business; borders do not halt emissions. Serious efforts to reduce CO2 emissions should therefore be conducted globally. 72 countries have already agreed to join this global emissions trading scheme for aviation as of 2021. Aviation is also included in the European emissions trading scheme (EU ETS). On top of that, aviation in the Netherlands is subjected to a noise tax.

Instead of punishing aviation in Europe, EU Member States and the EU Institutions should focus much more on measures that would actually reduce CO2 emissions. After years of negotiating and the file being stuck in the EU Council over the political sensitivities surrounding Gibraltar, it is high time to agree on the Single European Sky 2+ package and to create a real European Single Sky (SES). Currently, airlines have to operate in a fragmented airspace and already for short distances a plane has to fly many kilometres in addition with extra CO2 emissions and extra costs as a result. A genuine SES would reduce CO2 emissions in Europe by 10%.

Current yearly costs for airlines in the Netherlands: € 780 million euros*

Over the years, airlines operating at Schiphol have contributed more than € 750 million in soundproofing levies 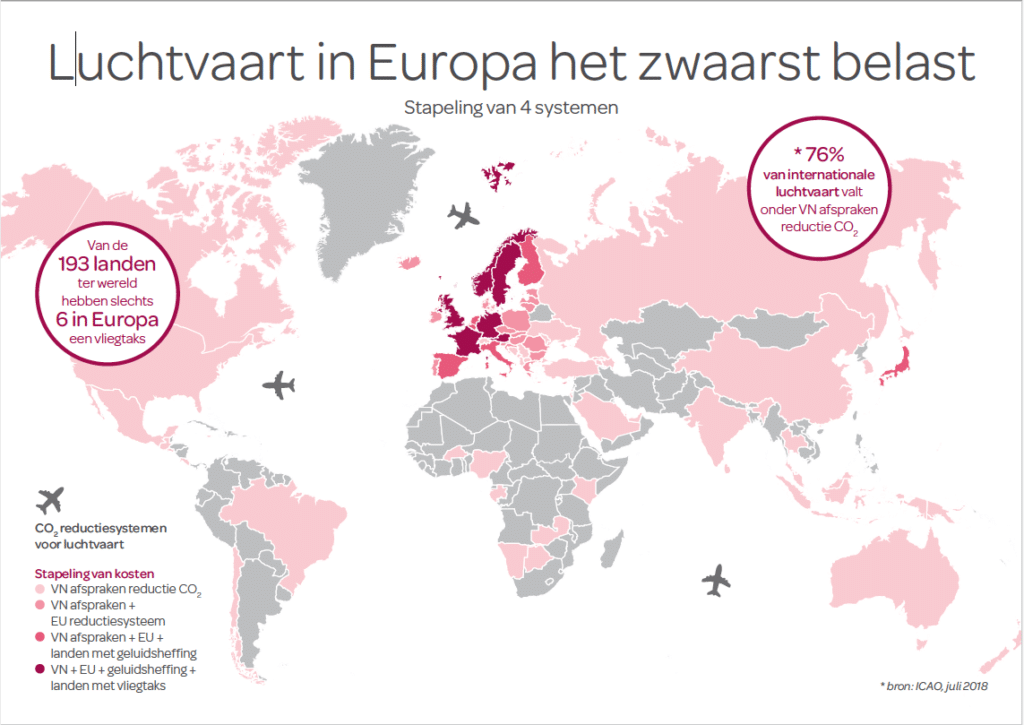